As I’ve said in previous reviews, I love John Cena, and Lil Rel. They are two of the funniest actors right now. ‘Uncle Drew’, and ‘Blockers’ are both hilarious, so I had high hopes watching this one. Maybe my hopes were too high, because this one is under whelming. The comedy seemed forced, and really wasn’t that funny. I hate to say it because I was really looking forward to this one, but it’s just okay and ultimately forgettable. I give it a 5/10. 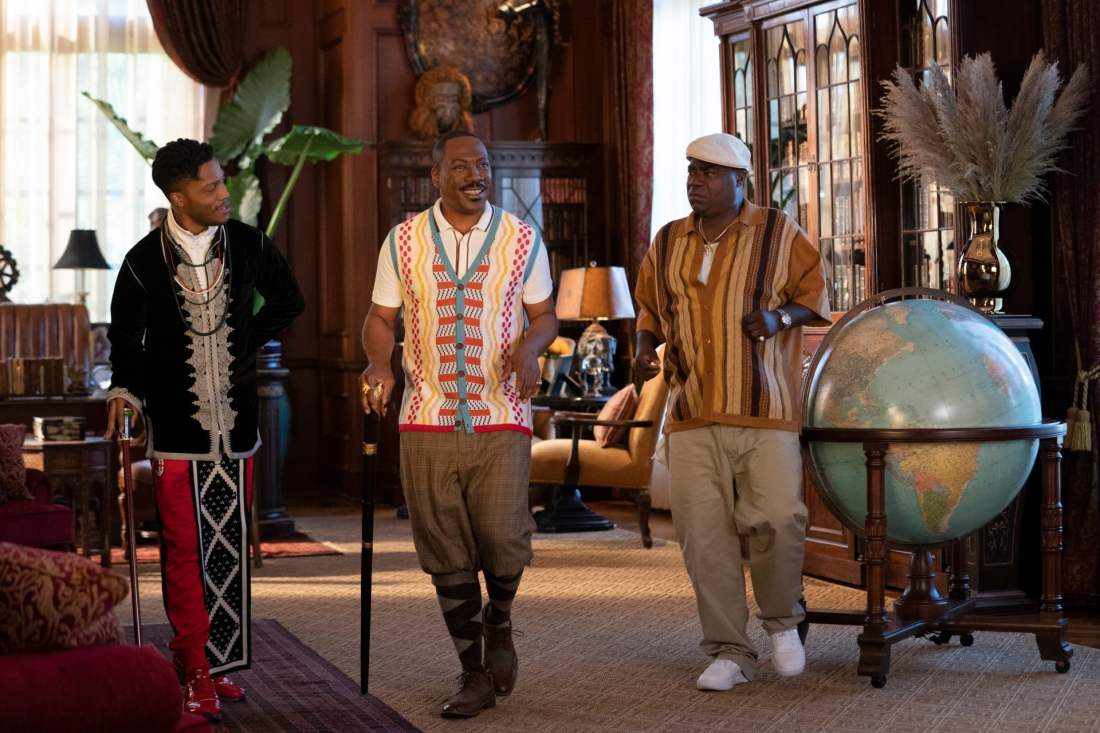 ‘Coming 2 America’ is the long awaited sequel to ‘Coming to America’, which is a little out of the blue considering the first one came out in 1988, over 30 years ago. However, Eddie Murphy is the king of comedy. ‘Bowfinger’, and ‘Meet Dave’, are two of the funniest movies ever made, so anything with Eddie Murphy I’m going to watch. ‘Coming 2 America’ has a blockbuster cast starring Eddie Murphy (Bowfinger), Arsenio Hall (Coming to America), Jermaine Fowler (Crashing), Leslie Jones (Ghostbusters), Tracy Morgan (30 Rock), Wesley Snipes (White Men Can’t Jump), and James Earl Jones (The Lion King).

Prince Akeem (Murphy), now King Akeem, travels back to America once again, this time to find his illegitimate son so he will have a male heir to the throne.

I’m not sure how anticipated this movie was, like I said earlier it was out of the blue, over 30 years later, I’m not sure if anyone was expecting it. But here it is, and the first one is such a cult classic, and with this firepower of comics it has to be good right? Unfortunately, that is not the case. This one drags, it has the potential to be great, but it just isn’t. Fowler plays Murphy’s part from the first one. He plays Murphy’s son and is brought back to Africa, and he’s the young naïve one like Murphy is in the first one, but he’s no where near as funny as Murphy is, not even in the same category. So that leaves Murphy, he plays a staunchly king in this one, which has no comic relief, so that takes out classic Eddie Murphy, that is typically hilarious. Which leaves Leslie Jones, and Tracy Morgan, and surprisingly they bring nothing to the table here. To say the least this one is underwhelming and a disappointment. They even make a joke in it about not needing sequels that is messes up the first one. They should have listened to their own joke. As much as it pains me to give an Eddie Murphy film a low score, I have to give it a 5/10. If you are interested, you can check it out on Amazon Prime.

‘Blow the Man Down’ is a 2019 drama/mystery starring Sophie Lowe (The Slap), Morgan Saylor (White Girl), June Squibb (Hubie Halloween), Margo Martindale (Sneaky Pete), Will Brittain (Kong: Skull Island), and Gayle Rankin (Perry Mason). Two sisters cover up a grizzly murder when one of the sisters accidently murders a man in self defense. They quickly learn there’s more to their sleepy seaside fishing village than meets the eye.

If you watch the trailer for ‘Blow the Man Down’ it looks really good. It’s intriguing, full of suspense, and mystery. Unfortunately, the trailer is the best part of this movie. It has an odd artsy feel to it, with singing fisherman throughout, and I get it, they’re hammering in the history of the village even with the underbelly. But this movie is slow, very slow. The story is there, but there’s no action to it, about ten minuets in when they kill the guy but that’s it. This movie is a let down, if you want you can watch it on Amazon Prime, but I would say give it a pass. It’s easily forgettable, I give it a 5/10.

This is arguably the most anticipated movie of 2020. Is it the one we asked for, or the one we expected? well no. If you don’t know what I’m talking about, KFC and Lifetime paired up to make a movie. Yes, you read that right, KFC made a romantic movie. In their defense it is only a mini movie that runs 16 minutes. Why they would make this, or anyone would agree to making this, is anyone’s guess.

‘A Recipe for Seduction’ stars Mario Lopez (Saved by the Bell), Justene Alpert (Bosh), Tessa Munro (The Adventures of Craig’s List), and Chad Doreck (iCarly). A young heiress struggles (Alpert) between picking between a rich suitor (Doreck), and the new house chef (Lopez). Besides the chef’s good looks he’s also bringing 11 herbs and spices to the table.

There’s a lot to unpack here. Lifetime is already known for their cheesy movies, but now they’re teaming up with KFC? It’s all a glorified stunt to bring views to KFC, and guess what? It worked, I’m writing a review about it, and the internet is obsessed with it. Is the movie good? No, it’s a train wreck. It’s the soap opera you see in the trailer. I give KFC props though, it gets us all talking about them. For that alone I give it a 5/10.

I love October, the fall weather, the changing of the leaves, the whole spookiness of the season. One of the best parts of the season is all the horror movies that come out during this time of the year. Unfortunately, Regal announced they’re closing down theaters across the board for the rest of the year, so not a lot of horror/thriller’s dropping this year. So we have to take what we can get.

There’s not a lot of great vampire movies out there, so I was pretty excited when Netflix announced this one. ‘Vampires vs the Bronx’ is about a local kid trying to save his neighborhood from going under as rent is being steadily raised. A real state company moves in offering to buy people’s businesses and homes, only problem is, they’re vampires.

As I said earlier there isn’t a lot of great vampire movies out there, and unfortunately this movie falls into this category. They just didn’t seem to know what direction they wanted to go with it. At times it was a horror film, then a comedy, then a cheesy mixture of both. The vampires also looked like they were borrowed from ‘Buffy the Vampire Slayer’, just a cheesy look. It just didn’t work, and in the end it’s a forgettable film. I give it a 5/10. 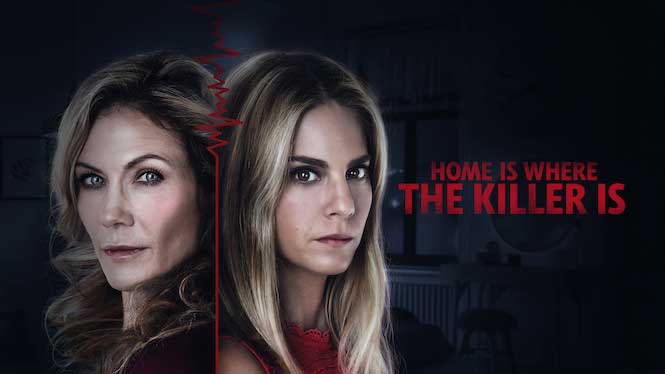 ‘Home is Where the Killer is’ is a 2019 thriller you can find on Netflix. It stars Stacy Haiduk (The Young and the Restless), Kelly Kruger (Blue Mountain State), Beth Littleford (Drillbit Taylor), Anne Leighton (Grimm), and Christopher Sean (Days of Our Lives). Nicole Turner (Kruger) is down on her luck after a bout with cancer. She rents a room in Julie Thomason’s (Haiduk) house. Little does she know her landlord is crazy and will do anything to keep her there.

This is an interesting movie, the story plot is good, the actors and actresses aren’t really known, and the acting is bad and way over the top. This deserves to be on lifetime, but as I say if it’s not a Netflix original it’s probably trash. It has flashes of being good, but overall the bad acting and over the top cheesiness ruins it. With the story line though, if a good director got a hold of this, and hired some good actors, this would be a great film. However, that’s the case with most cheesy movies. If nothing else is on I would say give it a watch, but you’re not missing anything either. It’s your run of the mill movie, I give it a 5/10

‘The Night Clerk’ is a 2020 thriller starring Tye Sheridan (Ready Player One), Ana De Armas (Knock Knock), John Leguizamo (To Wong Foo, Thanks for Everything! Julie Newmar), Helen Hunt (Girls Just Want to Have Fun), and Jonathon Schaech (That Thing you Do!) ‘The Night Clerk’ is about a young man (Sheridan) who works at a hotel as the night clerk. He suffers from Asperger’s syndrome and has several hidden cameras in the rooms in order for him to study and mimic people which helps him with his social awkwardness. He ends up witnessing a murder on one of his live feeds.

‘The Night Clerk’ has a great cast, Tye Sheridan really nails his role as a man with Asperger’s Syndrome, and the story is there. However, after that, that’s it. It falls flat, and I mean it falls hard. This story has so much potential, but nothing happens. Sheridan witnesses the murder in the beginning of the film, and that’s it, that’s the most action the movie has. It’s a disappointment with the caliber cast and story line. I would pass this one up, but if you do want to watch it, you can find it on Netflix. It falls into what I’ve said before, if it’s not a Netflix original it’s probably not worth watching on Netflix. I give it a 5/10. 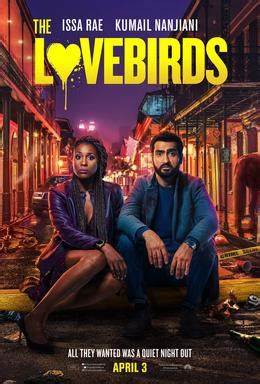 ‘The Lovebirds’ is a 2020 comedy that was just released to Netflix. It follows Leilani (Issa Rae) and Jibran (Kumail Nanjiani), a couple who recently broke up and who unknowingly get involved in a murder. Scared they’re the main suspects, they are now on the run from the law and determined to find the real killer. Other than Issa Rae (The Photograph) and Kumail Nanjiani (Stuber), ‘The Lovebirds’ stars Paul Sparks (House of Cards), and Anna Camp (Pitch Perfect).

I read an article saying one of the only good things to come out of COVID-19 is ‘The Lovebirds’ skipping theaters and coming straight to Netflix. Which is a terrible thing to say, but it’s true. I kept seeing this movie previewed in theaters before quarantine took place, and I knew it was a movie I had to see. So I was beyond excited when I heard it was coming to Netflix. Kumail Nanjiani is hilarious, I love him in ‘Stuber’. Unfortunately, as much as I hate to say it, ‘The Lovebirds’ is a major letdown. It’s one of those movies that all the funny parts are shown in the previews and that’s it. It’s not a bad movie, just an okay one. I wouldn’t go out of my way to watch it, I give it a 5/10.

‘A Fall From Grace’ is a 2020 Netflix original drama/thriller by Tyler Perry. It follows the story of an older woman, Grace Waters (Crystal Fox), who recently divorced, falls in love with a younger man. Everything seems perfect until they get married and he turns from Dr. Jekyll to Mr. Hyde. As things get worse and worse, she gets arrested and faces life in prison for the murder of her new husband. Her case depends on her more than green public defender Jasmine (Bresha Webb).

I’ve said before in the past Netflix keeps pumping original after original movie, I like that. I also like Tyler Perry’s work and the trailer is very intriguing, so it seems like a win. It features a pretty decent cast starring Crystal Fox (Driving Miss Daisy), Bresha Webb (Night School. Meet the Blacks), Phylicia Rashad (The Cosby Show), Mehcad Brooks (True Blood), and Tyler Perry.

Unfortunately that’s about as far as this movie goes. The story is great and hooks you in, and it has a great twist I didn’t see coming, but after the first half it just falls flat, and it falls hard. The acting isn’t really that good, it’s on the cheesy side. It stresses over and over how the public defender isn’t experienced, or that good. She doesn’t seem to care about her job, and it makes it not very believable, and you don’t really root for her. The more you think about the movie the more plot holes you can tend to come up with. It’s a great story that could have been executed better, again unfortunately it falls flat and is easily a forgettable movie. I give it a 5/10.